In 1999, John C. Adams (founder of Primordial Muse) created a system for building “2.5D” animated characters. It used 2D vector graphics and gradients, had lip-sync capabilities, control panels for testing the character’s movements and expressions, and could be animated within a web browser by sending simple text commands.

After joining the startup company “Talkie, Inc.” later in 1999, JCA adapted his animation system to work with their A.I. technology, and built most of their interactive characters and other demos within it. Over the following years he worked with a fantastic group of A.I. programmers, engineers, writers, all varieties of internet-startup crew at Talkie, and managed a team of artists for a variety of projects there.

For a recent example of what this type of animation system can do, see the Adobe Character Animator system. It uses nearly identical methods for animation of 2.5D characters.

On the left hand side is the original character that JCA brought in to demonstrate his system for Talkie, and he later adapted her to be the first Talkie character. On the right is “Barkie” for Pets911.com

On the left is “Fiona” from 2003, a demo for a new character system by JCA. On the right side are a few more of his interactive Talkie characters. 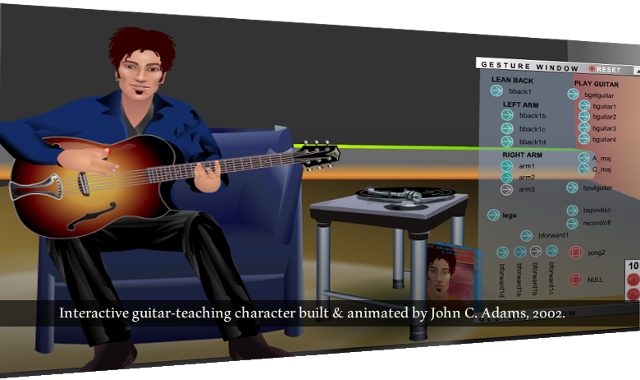 This is one of JCA’s favorite characters to build, his role was to teach guitar and discuss topics like music history.