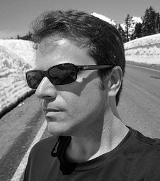 Hi, my name is John C. Adams, sometimes known as “Jack.” I am a 3D artist and software developer living in California. After earning a BA in Art from UC Santa Cruz, I relocated to Los Angeles where I worked with many clients including Activision, Sprint PCS, Progressive Insurance, Cox Communications, Sun Microsystems, Intel, also government work with agencies in Kansas and the USVI.

My career as a 3D artist began on various PC and PlayStation games in the late 1990’s. After this I joined internet startups and built online businesses, while pursuing side projects in 3D graphics. Currently I’m focused on a return to my roots in animation, 3D modeling, visual effects, programming, and design.

Samples from my professional history

As a team member on a wide variety of projects over the years, I have often played the role of a “puzzle solver”, getting the answers to tough questions and keeping a project moving forward around any roadblocks.

Problem: After being hired as a 3D Animator, my first assignment was to finish a character model and figure out how to animate a “blobby alien slug” character for Cold Blooded. This was a video game prototype and cartoon (later canceled), featuring the legendary Bruce Campbell.
Solution: The answer I found was a 3D Studio plugin for wave deformations, mixed with a lot of animated squashing of the model, to get a pretty convincing set of actions and behaviors for a disgusting blob character.
Effect: One of my proudest early creations as an animator. Other challenges for 7th Level included creating “skeleton soldier” characters and animations, and designing a few “post-apocalyptic” 3D levels from scratch working with a small art team, along with minor contributions to their Monty Python and Howie Mandel productions.
Problem: Initially hired as a 3D Modeler on PlayStation game Pitfall 3D Beyond the Jungle. But they needed someone who could create visual effects for the game. Unfortunately, the available texture memory for effects was very limited.
Solution: The team suggested looking into “color-cycling”, a technique which uses very little texture memory, but is also very limited for animation. So while creating 3D models for the game, I also experimented with creating color-cycling and other visual effects. I ended up applying color-cycling in places that no one had expected, such as raindrop splashes, particle bridges, waterfalls, lava churning, and moving fog.
Effect: While building 3D game models I also enjoyed inventing and creating the special effects. Other “puzzle solving” that I got to tackle while working on Activision games included animatics tests for game mechanics, characters built out of fire/water, smoke/fire hazards, technology development for 3D visual effects, animated environment models, and making animated user interfaces.
“Talkie characters” were interactive assistants with artificial intelligence, early precursors to Apple’s Siri.
Problem: The company was facing delays in the development of a custom 3D engine for their characters. I was initially hired as a 3D Character Animator to help with that development.
Solution: Prior to starting at Talkie, I had created a system for building “2.5D” animated characters. My character system used 2D vector graphics and gradients, had lip-sync capabilities, control panels for testing their movements and expressions, and could be animated within a web browser by sending simple text commands. This kind of tech happened to be exactly what they needed for their business!
Effect: At Talkie I adapted my system for use with their A.I. technology, and built most of their interactive characters and other demos within it. Over the following years I got to work with a fantastic group of A.I. programmers, engineers, writers, all varieties of internet-startup crew, and managed a team of artists for creating Talkies and related projects. 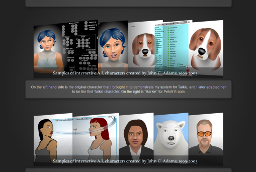 Click for more information about these interactive A.I. characters, created between 1999-2003.

Problem: The multi-national Protagonist team needed someone who could build about a dozen characters for a technology demo, each with a large range of realistic animations, and bring them into a 3D engine which itself was in early development.
Solution: For Protagonist, I authored the production pipeline for art assets and animation into the German-made 3D engine. We then built a collection of characters and animations with the assistance of a few artists. For this project we had a number of motion capture studio sessions in Santa Monica, where I worked as the primary animation and technical director, figuring out how to get the mocap suit working with the software, and assisting the actors and actresses with performing for animation.
Effect: As planned it all worked. We created a large library of character animations from the mocap data, and got them working within the 3D engine.
A significant variety of clients offer various artistic and programming challenges in: graphic design, indie game development, eLearning and training systems, websites for film promotion, music news and podcasts, medical concierge, catalog sales, and technology for accessibility.
Our development team have supplied artistic and programming solutions for a great variety of interesting and challenging projects since 2003.